Copenhagen has a long tradition of breeding elephants. The first calf, Kaspar was born already 1907, and the king of Denmark has several elephants as a gift from the king of Thailand.

The late Danish king Frederik IX wrote a handwritten letter the 29th of January 1962 to the chairman of the board of the Copenhagen Zoo, Dr. Böje Benzon, with the following content:

Dr Böje Benzon
As You know, I was honored with the gift of three elephant babies in Thailand; when the first arrives i dont know, but I would like to ask You if I may deponate them in Zoologisk Have. The youngest and last one is only seven months old, so I doubt that he comes within the nest two years. The other two, I believe, comes within two months.
With best greetings to Your wife,
Yours sincerely
Frederik 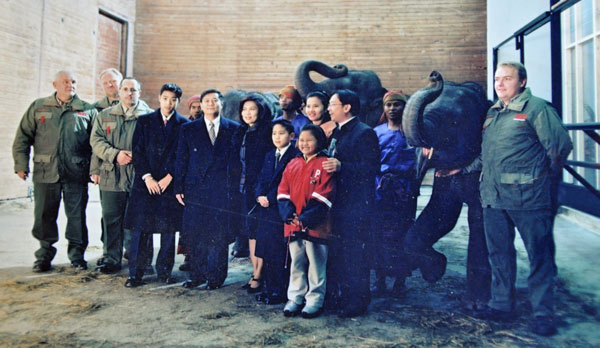 2001: In 2001 Copenhagen recieved three elephants from Surin in Thailand, 2 a gift from the king of Thailand, to the king of Denmark, and a thir, named Surin, was a gift from the people of Surin Province. Copenhagen staff: On the bottom from left are; John Stegmann, Kim Oliver and Claus Pedersen. On the right is Peter Jensen.(Photo: Photo © Nai Somchai Madee, Ban Ta Klang,Surin.)